The Wisdom of Kids

Last night, I gave the kids a bath in their bathroom.  (We usually do baths in our bathroom, which has a larger tub).  While my 9 year old daughter was still in the bath, I ran downstairs to grab something.  She called down to me saying she was hearing some loud banging noises.  As I went to investigate, I noticed multiple spots dripping from the dining room hallway ceiling. 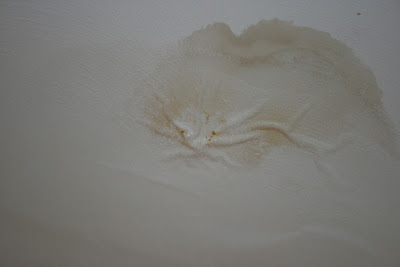 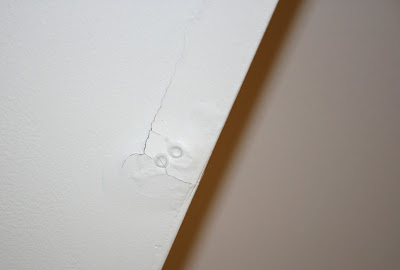 I hastily threw down some towels (on the wooden floor) and told my daughter to empty the tub.  The kids rushed down to see our little flood, and instantly wanted to pitch in and help.  My daughter grabbed a variety of vessels to catch the falling water: 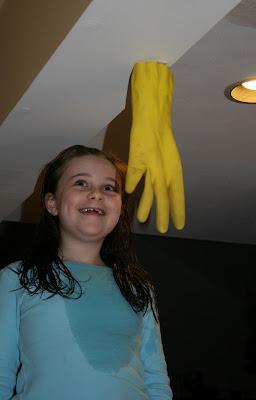 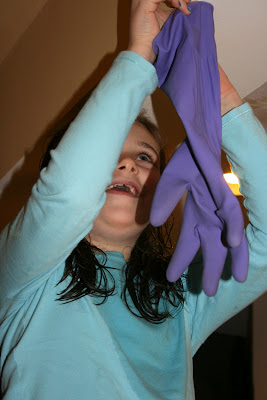 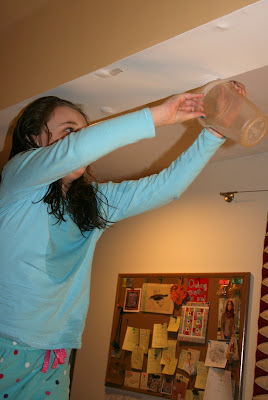 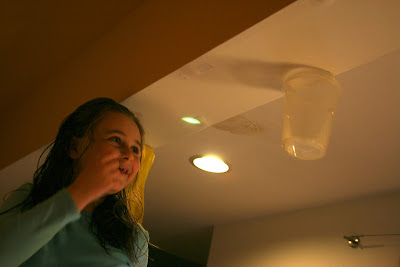 My daughter wanted to hang the containers (and rubber gloves) from the ceiling with Scotch tape.  I initially told her the tape wasn't going to hold on the textured surface of the ceiling (not to mention the wet factor), but she was determined, so I figured it would be a nice little scientific experiment/learning experience.
Well, my daughter proceeded to prove science, common sense (and me) wrong!!
Most of the taped up containers held for at least an hour, and two were still hanging this morning! 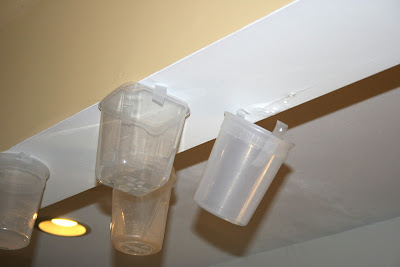 So the next time you have a leak in your house, no need to call the plumber-- just ask the kids!
Posted by Elisa Black at 9:37 AM

Not exactly the relaxing bath and bed time you'd planned! Hope the leak didn't cause too much damage!
P.S. Your kids are very cute!!

Goodness! I hope that you get it fixed. I am sure that it could have been much worse. But I do love your kids ingenuity!

Great thinking outside the box!! Hope the leak stopped!

Leaky ceiling aside, what a clever girl you've got!

Hope all turns out ok with the leak.

Oh dear! I hope there isn't too much damage E! It's lovely that you can see the light side to it though, great lesson for the kids! Jxo

I'm sorry about the leak but that is hilarious! I love the picture of them all hanging on the ceiling.

I'm sorry about your leak and I hope that it isn't too serious. The photos are hilarious!

I know a leaking ceiling is no laughing matter, but how funny to catch the drips with rubber gloves and beakers! Your kids are funny bunnies indeed!

Hope you get the leaky problem sorted out soon!

I seriously love the gloves!! What a smart young lady to come up with such creative ways to contain the leaks! :o)

Wow - OK, so where did the leak spring from? Nasty, nasty stuff, those leaks because it means letting the plaster dry out completely before re-doing it all which ultimately means sanding etc. Ugh. Not to mention the plumbing bill after you found where the leak sprung from . That, in itself would be enough to make me hide out for a while but I love how your kids got so creative on catching the falling water and I especially loved to read how you relaxed into the catastrophe and let them participate and feel useful and of course I loved to see their smiles. If you can smile during a crisis then you know you have at least a toe-hold in sanity. But I would ask myself if I want that toe-hold! As insanity can be much more appealing!!!

Hi Elsa, you ok? Haven't seen anything from you for awhile

Was looking at your lovely crane and taking pics beside it and realised I hadn't read anything from you for ages - sorry think you fell victim to a google reader mess up!

But what a post to come back to! We have leaks in our newer roof - this tip will come in handy!

Hey Elisa! I wanted to let you know that I passed on the Liebster Blog Award to you! Hope all is going well. You can read about the award here:
http://myroadtoinspiration.blogspot.com/2012/05/i-received-award.html

hi everyone
check out the fabrics at www.fabric-distributor.com,
they have the cutest, cheapest and best quality fabrics
come check them out!

I was looking up information about ceiling leaks and stumbled happily onto your blog. Good for you to embrace that crazy moment instead of making you crazy! I am sure enough do - as they do for me as a stay-at-home mom of two as well. But every little "seeming" catastrophy that we can laugh off, is a bright spot. Thanks for making mine one! Hope you and your adorable family and still making happy moments more often than not two years later!

Elisa Black
First and foremost, I am a wife and mother of two. I am also struggling with postpartum depression after the birth of my 2nd child. I have recently discovered quilting as a therapeutic and creative outlet and am now addicted to it (although I have a bad habit of not finishing my tops once they are pieced!). I am a technophobe and technically challenged, but have recently become addicted to blogs about quilting/crafting, motherhood and appreciating the little things in life. So here I am, feebly attempting to blog about my life's joys, inspirations and challenges. 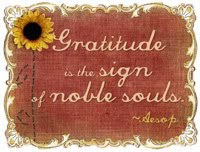